An Update On Mark

Hello folks. You know what gets old? Every time I post to one of my blogs it seems like I’m saying “sorry it’s been so long since I posted blah blah blah.” I’m going to try not to do that any more…starting next time.

It’s been a long time since I posted, and a lot has happened. I’m going to see if I can catch you up. Let’s see; Overcoming Going Under is almost finished (and you can read about the progress of that over at the OCGU blog), I’m pretty far into a documentary/performance/dramatic feature film about Singer/Songwriter Kevin Sandbloom called “Soul Troubabour”, and I have several new ideas that I plan to keep you up to date on the progress of here, but they aren’t ready to talk about yet. 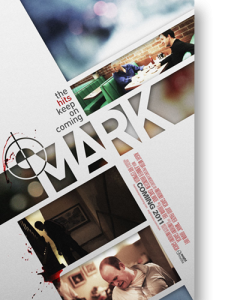 Then there is “Mark.” The first three episodes were in the can two years ago, and I completed the edit on them quite a while ago too. There are a few things left to do for those episodes, but what has really been holding it up is a plan for how best to launch the web series. I figured the best way would be to have the whole first season (whatever that is…since we could make it whatever we want really) ready to go so that each episode could be released on a regular schedule without any long gaps. The trouble has been finding the time to work through those concepts, arc out the season, write the episodes, get down to LA to shoot them (not to mention casting, location scouting and all the other pre-pro work that goes into a shoot), edit them and get them ready to release.

So some of that work is done. The first couple seasons are outlined, the first season in great detail, and the actual writing is underway. Soon we’ll be tackling the pre-production and I’ll take some three or four day weekends down to LA to shoot. Needless to say it’ll be a little while before the whole first season is ready to trot out.

So I think what we’re going to do is go ahead and get those first three episodes ready for prime time and release them ahead of the rest. It’ll be like a little teaser pre-season. Like when Battlestar Galactica started out with a two hour special instead of a regular pilot episode. What do you think? Sound like a plan?

I’ll try and do a better job of posting here, now that I’m settled in Santa Cruz. I definitely have lots to talk about (including all the gear I bought earlier in the year in preparation for Mark shoots, as well as all the other projects in the hopper) so I’ll carve time out to tell you about stuff as it happens. Talk to you soon and happy new year!