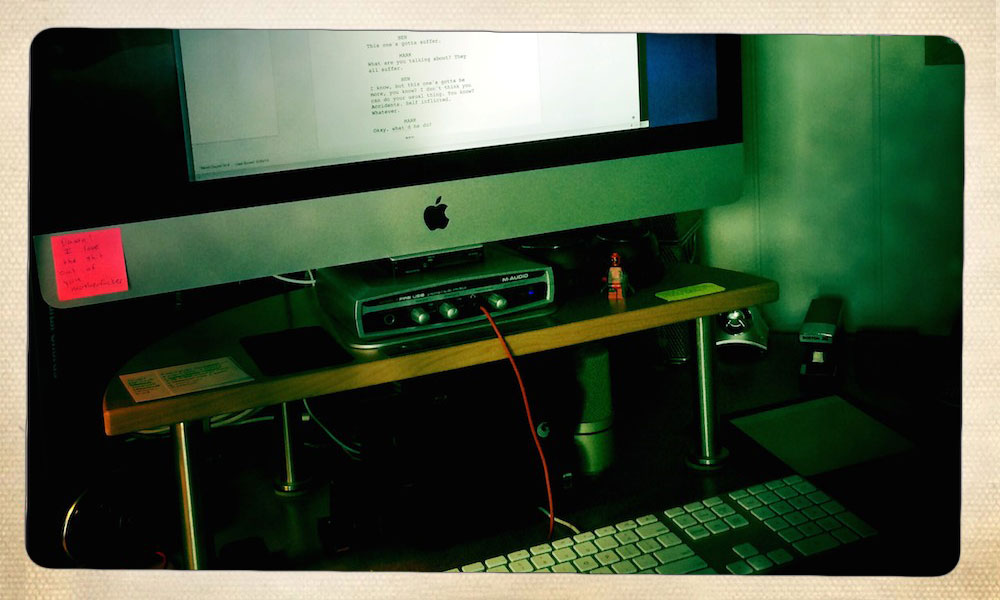 Of course writing the script is the least expensive part of the the whole film making process right? Well, if you don’t count your time being of any value that is. It takes loads of time, that’s for sure! But you don’t need any equipment. It will be the road map for everything you do throughout the rest of the process so it’s definitely worth taking the time to get it right.

They say “writing is re-writing” and at first I thought that sounded silly. It was a daunting idea to think that when I was done writing something that would only be the beginning, and that I’d have to go over it and over it until it was as good as I could make it. I thought I’d be able to get it right the first time or not at all. After several drafts of my first script though, I found it to be true, and discovered a great deal of satisfaction from honing the script until it is like a well oiled machine.

There are a lot of rules for script writing, and I’m not going to go into them all right now (I’d dare say I don’t know them all – and we can talk more about them in later posts) but it is safe to say that it is a very structured form. There are a couple things I do want to discuss though, which have been hard skills to develop but have made my scripts much better.

The first thing I want to mention is writing visually. In a novel you can write all sorts of things that don’t work in a script – you can write the character’s thoughts and talk about their intentions and on and on. You can write whatever you want. But in a script the only things that should be on the page are things you can see or hear. Period. That’s it. I don’t want to read about why the character is doing what they are doing, and I don’t want all sorts of descriptions of their thoughts. Unless there is going to voice over then we can’t hear that crap. Leave it out.

Plus you aren’t the actor. The actor will choose what to think about and will do way more work on their character than you ever will. Leave that to them. Give them what they need to tell the story and that’s it. I guess I agree pretty strictly with Mamet on this subject (On Directing Film) 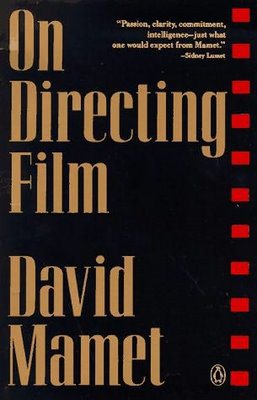 On Directing Film by David Mamet

The second thing are camera moves and phrases like “we see.” Leave that garbage out too. If you write “We see Mark walk across the room” you’re pulling the reader out of the story if only for a second and reminding them that they sitting there and that they are reading a script. Just say “Mark walks across the room.” It makes for a better read.

Also I found that it is more challenging to come up with ways to describe things so the camera moves are irrelevant, or obvious without being stated directly. I choose to make a new paragraph for each “shot” and simply describe what I imagine would be seen on the screen, for example “he shuffles across the floor, his shoes scuffing through the dust” instead of “close up on feet. camera tracks as we see the shoes walk through the dust.” all that extra stuff just detracts from the story and makes for an ugly read I think. Plus you aren’t the director or the cinematographer (unless you are, then you’re writing for yourself, so write how ever you want) so you’re just stepping on their toes before you even meet them.

Even though I am writing for myself I write this way because I want the script to be a worth while peice even on it’s own – I want it to be a good read. Now, granted, if I were writing a script I wasn’t planning on directing, something I hoped to sell, then I would write far less. I would write very lean and only tell the story on the page. I would leave all the directing decisions to the director. If you’re not sure what I mean just make a short film and really examine your script as you go along – you’ll find the bits that are directing on the page, the parts that don’t need to be there if the writer and the director are two different people.

Okay, next time I’m going to talk about Script Breakdowns (which I just completed for the first ‘Mark’ script) If you have any questions or comments feel free to post them. I’d love to hear from you. Thanks for reading!